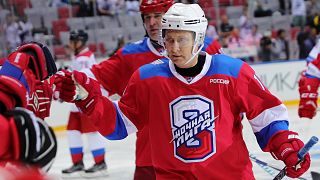 Russian President Vladimir Putin hit the ice on Friday (May 10) in a hockey game in which he showed off his puck-handling skills and scored eight goals, a display that reinforced his image as a man of action.

Skating alongside Russia's defence minister Sergei Shoigu and Russian hockey greats such as Pavel Bure and Igor Larionov, Putin helped his side to an emphatic 14-7 win in the Night Hockey League.

After opening the scoring unassisted by beating the goaltender two minutes into the game, the 66-year-old added seven more goals, making him the top scorer.