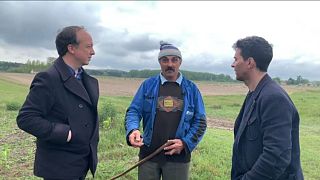 Memories of migration mayhem on the Hungary-Serbia border

Euronews is on a road trip to feel Europe's pulse ahead of elections later in May. Our correspondents Damon Embling and Gabor Tanacs have reached the village of Asotthalom on the Hungarian-Serbian border.

It is a different atmosphere in the village of Asotthalom to what it was back in 2015 when this place suddenly found itself on the frontline of Europe's migration crisis.

Now all is calm, but back then, with thousands of people crossing into Hungary from Serbia, some ended up hiding in the vast farmland here.

Farmer Janos Toth recalls the day he helped a group of 16 migrants.

"They came in, stood in a queue, they were pumping the water," he said. "I was pumping first, then they told me they would. They drank a litre of water per head, so quite a lot…

"They did some small damage, like trampling plants. They were just marching through everything, like animals. I mean like a sheep or a different animal that does not care about these things. If there was a fence in their way, they would take it down and go on. But it was more of an annoyance than an actual problem."

Hungary's government under Viktor Orban controversially threw up a high-tech, razor wire fence along the border. Orban called mass immigration from the Middle East and Africa an existential threat to the European way of life.

We caught up with Tamas Szalma a civil guard and he showed us the barrier. Cameras and heat sensors track our movements.

"When they started to march on the road, groups of 30 to 40 young men, that got people thinking: 'Oh, this is not really good for us, these are not families with young children asking for water anymore. That was the moment that put the people here on alert'."

Szalma added: "Even this year we managed to catch a few migrants, although it is not our job. But from the moment they cross the fence, they commit a sort of criminal act and the civil guard must hold back a criminal caught in the act. Anybody can do it, but for the civil guard it is a duty."

Watch Damon’s and Gabor’s full report from the Hungarian-Serbian border in the video player, above.