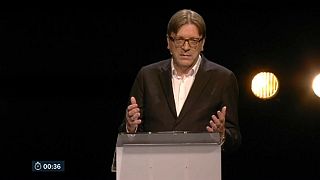 Belgian MEP and the European Parliament's Brexit co-ordinator Guy Verhofstadt will join the UK's Liberal Democrats on the campaign trail ahead of the EU elections.

Verhofstadt will be knocking on doors in an affluent area of North London to tell people that Brexit should be cancelled - alongside Vince Cable and his Liberal Democrat MEP candidates.

The Liberal Democrats, who are running on a 'Bollocks to Brexit' mandate, made considerable gains in UK local elections last week and are seen as an antithesis to Nigel Farage's Brexit Party.

Cable also said the elections are essential in order to fight the "dangerous forces of populism".

Certain sections of the British media couldn't resist making their opinions known, with one tabloid calling Verhofstadt a "curtain-haired slimeball".

Watch Vincent McAviney's report in the player above