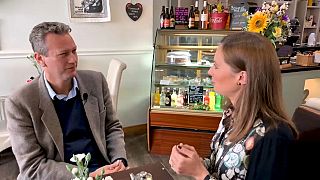 In the run-up to the European elections, Good Morning Europe host Belle Donati is travelling across the continent to meet Members of the European Parliament in their own constituencies. She's having breakfast with them to talk about how they take their coffee - and how they want to change Europe.

In this instalment, she speaks with British MEP, Nathan Gill who is member of the Brexit Party.

Did you ever think that you’d be here a month after Britain was meant to leave the European Union campaigning to get back to Brussels?

No. Absolutely not. The 29th March I’d planned to take my family to Brussels to watch the Union Jack being taken down and then we were going to go on holiday and then I was going to start my new life as non-politician.

We told our viewers that we were coming to interview you – one of them tweeted back saying the only reason Nathan Gill wants to go back to Brussels is for salary and pensions, and if he really wanted to change Brexit and make Brexit happen he would go to Westminster, what would you say to that?

Exactly. I totally agree with that person on the Westminster point. If we are going to do what we’ve said and actually change politics for good - that means for better and also forever - then we need to get into Westminster and we have to break this two-party seesaw mentality.

If we look even at your past voting record – there are many more against than there have been in favour. It looks often as though even if you thought possibly the policy was sensible you either abstain or you vote against…

Yes, even if it is something that on face of it you think this is wonderful, this is going to be so great for Europe… our red line has always been member states are the ones who should be legislating for their own countries, not the EU.

But can you see that in the European Parliament there is a sense you’re not entering into the voting sincerely, you are essentially saying even if I think this is a sensible policy, I am going to vote against it purely because my objective to sort of destroy Europe from within is stronger than my objective to get something passed?

It’s not that we want to destroy Europe from within it’s that we want to make sure that sovereignty rules, we want sovereign independent nations who yes, can trade together, can help each other with environment and things like that but we are not under the cosh of unelected bureaucrats in EU.

Could there be a European Union you could be a part of?

Even if it allowed that sovereign decision-making?

Click on the player to watch the full interview with Nathan Gill.