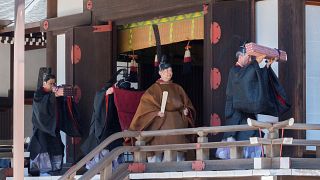 Japan's Emperor Naruhito on Wednesday performed a Shinto ritual at the Imperial Palace to report to imperial family gods the plans for the main ceremonies of his succession later this year.

Naruhito ascended to the Chrysanthemum Throne on May 1, the day after his father Akihito abdicated.

Naruhito, wearing a headdress and an ancient outfit dyed in burnt orange, prayed at the Kashikodokoro shrine followed by palace officials who carried the imperial regalia of a sacred sword and jewel he inherited when Akihito abdicated.

Enshrined at Kashikodokoro is the goddess Amaterasu, who is the mythological ancestress of Japan's emperors.

A main ascension ceremony is planned in October, when thousands of guests from Japan and around the world will be invited to attend, followed by a religious harvest rite in November.