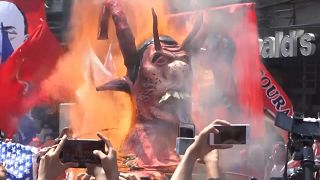 Thousands of Filipino workers and labour activists marched Wednesday near the Malacanang presidential palace in Manila to mark Labour Day in the Philippines.

They demanded that the government of President Rodrigo Duterte address labour issues including a minimum wage increase and the end of contractualisation for many workers.

Police said about 5,000 people joined the march, which comes just over a week before senatorial elections are held in the country.

One labour group said its members would not vote for any candidate endorsed by Duterte and burned an effigy of the Philippine leader.

May Day – known in the Philippines as Labour Day – is typically commemorated with demonstrations by workers' rights groups and unions in Manila as well as other key cities across the country.