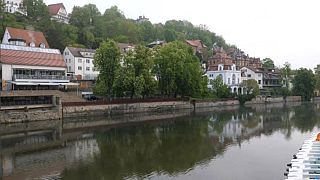 Tübingen's mayor warns owners might be forced to sell their land

The city council in the German town of Tübingen has approved a plan to force landowners to build housing or face sanctions.

This weekend 20 letters were sent out to people that own unused land in the area. According to the letters, they now have four years to either build residential living space on or they will be forced to sell their property to the city council at market value. If they fail to comply they would face a fine of €50,000. The reclaimed unused land will then be used by the council for residential building. In total, the mayor is targeting 550 plots of land so there will be many more letters going out in the months ahead.

The mayor belongs to the German Green party and politicians from the left of the political spectrum have generally been supportive of his plan. Opposition specifically from the free market FDP Liberal party has been fierce. They talk of socialist experiments in the middle of Germany. The controversial mayor seems to be popular with the public as rents have skyrocketed over the last few years in Tübingen. The mid-sized town is on the on the same level as large expensive cities as Munich and Frankfurt when it comes to housing costs, so this move appears to have won local support from residents.

A similar proposal has been launched by campaigners in Berlin, but it has not been made official by the authorities yet. However, there is one big difference: in Berlin the campaigners are targeting large housing companies while in Tübingen the mayor is targeting private citizens. The owners of these slots of land are overwhelmingly wealthy older people that are saving the land as investments, or as the mayor puts it: "a place for their grandchildren to one day build a house." It is a topic that is being debated all of over Germany and could be a template for other European countries.