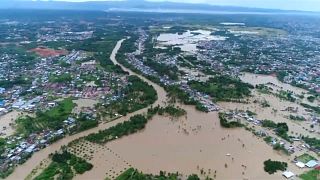 More than 12,000 people have been evacuated and new floods and landslides are expected if the rains continue, the national disaster agency said.

Thousands of people are involved in the search and rescue effort, the agency said, but distribution of aid has been hampered by power cuts, inaccessible roads and large distances between various disaster-hit areas.

The highest number of deaths was in central Bengkulu where a landslide killed nearly two dozen people.

Deforestation, reduced water catchment areas and inappropriate land use in high-risk areas have increased vulnerability to floods, according to the disaster agency.