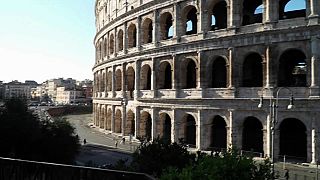 A tense meeting between Italy's coalition partners on Rome's crippling debt has broken up without a final resolution.

The capital's €12 billion shortfall - dating back more than a decade - must be restructured to avoid defaulting, but the League and the Five Star movement still have conflicting views on the issue.

The coalition partners had previously agreed on a package that was awaiting cabinet approval.

But relations between the coalition partners were further complicated a week ago by allegations that League politician Armando Siri had accepted a bribe from a Sicilian businessman with alleged Mafia connections. Siri's political fate remains contentious; Five Star has renewed its demands for his resignation.

Matteo Salvini, Joint Deputy Prime Minister and Leader of the League Party, is continuing to suggest that any assistance for Rome should mean cities experiencing similar financial issues are also given help.

The eventual terms of any deal will now be further considered in the Italian parliament.