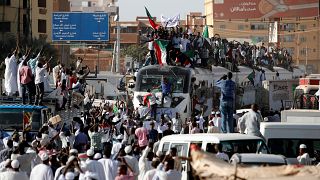 Hundreds more protesters have joined a sit-in in the Sudanese capital, Khartoum.

The new protesters piled on the roof of a packed train which left from the birthplace of the uprising that toppled former President Omar al-Bashir. About 4,000 protesters greeted them at Khartoum's main station on Tuesday. The demonstrators are concentrated outside the Defence Ministry and are calling for Sudan's military to relinquish power to civilians.

Protesters claim the military rulers are made up of ‘remnants’ of the al-Bashir’s old regime and are urging the authorities for an immediate handover of power to a civilian government.

The Sudanese military government says it is considering a joint military-civilian council and insists it is responsible for the security in the country.

READ MORE: Why are people protesting in Sudan?