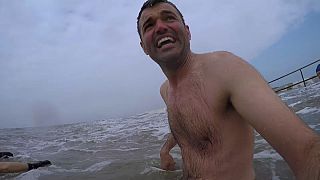 Ahead of Euronews' European elections coverage, we want to find out what you want for the future of the EU. Our reporter Stuart Oates has been sofa-surfing across the continent, staying with locals in an effort to learn about what's important to them.

In this episode, Stuart visited Ireland and stayed with Conor O'Neill, who owns The Glyde Inn in County Louth.

During his stay, Stuart pulled some pints of Guinness, went for a dip in the Irish Sea, picked some kale, and followed Mr O'Neill to one of his suppliers to ask how the EU affects him in his day-to-day life.

"I think it's always good to be a part of something bigger. I think, as Irish people, we love mixing with other nationalities," he said.

But, despite not being a part of Britain, Mr O'Neill said that Brexit is still one his main concerns.

"For us, the scariest thing is if a [hard] border goes up there. A lot of our business comes through Northern Ireland. If there's a hard border, that's going to screw all of that up."

You can watch the full report above.