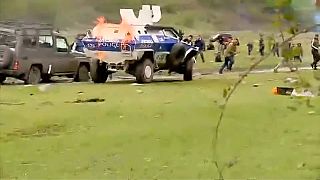 Around 300 residents of the Pankisi Gorge gathered near the village of Birkiani in Georgia to protest against the construction of a hydropower plant, saying it could damage the environment and force them to leave their homes in the mountainous region.

Some demonstrators threw stones at police, according to the independent Rustavi-2 TV station, which also reported police used tear gas and rubber bullets to break up the protests.