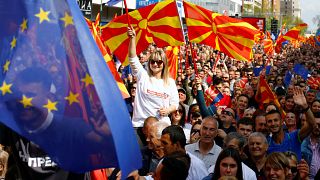 One year on from the controversial name change, North Macedonia is preparing for the first elections of a new era.

Next week, the country will face its sixth presidential elections since its independence from the former Yugoslavia, though the first under its newly minted name. As polling day opens, three candidates are running for the presidency, it’s an election that could determine the future of the European Union in the Balkans.

Perhaps inevitably, the Prespa Agreement with Greece – the accords which saw the Republic of Macedonia become North Macedonia - is proving the focal point of the election. The name change has galvanised European aspirations, whilst also rallying nationalists who say the country has been robbed of their dignity. within the country the quality of the reform processes undertaken by the current government of social-democrat Zoran Zaev.

Leading the pack is Stevo Pendarovski, candidate of the governing SDSM coalition, a former adviser on national security in the Presidential Cabinet. He has adopted the campaign slogan of Together Forward, and is attempting to mobilise support across the weaving ethnic divides of North Macedonia. Pendarovski believes that his election of a supporter of the Prespa Agreement like himself will resonate across the Balkans region.

“If my candidacy is going to be supported by the majority of the people living in North Macedonia, that will mean an additional boost for the pro-reformers and pro-European needs in the region, and of course will say for the other people of other countries that this is the way forward, only by resolving the so-called frozen disputes with unfortunately still are around us.”

Yet his pro-European message is being counter by Gordana Siljanovska Davkova the candidate from the right-wing VMRO-DPMNE. The University Professor is playing to a significant crowd of Macedonians who were angered by the Prespa Agreement, adopting the slogan Justice for Macedonia. She has called for the Prespa Agreement to to be changed, labelling it “degrading”.

“Good neighbour-relations are not built with forgotten dignity," she told Euronews

The race’s outsider is Blerim Reka, a former Ambassador of North Macedonia to the EU. Straddling the middle ground, Reka is a supporter of the Prespa agreement, but is also fiercely critical of the incumbent SDSM’s failure to carry out reforms that will be essential for any accession to the EU.

"It’s time for Macedonia to start building a republic with a rule of law, fight against corruption and organised crime, and also reforms in the public administration. Why? Because I think that only with these three or four main preconditions we could be a new member of the European Union in the future".

The first round of elections is scheduled for 21 April, but the upcoming poll is as much a vote on North Macedonia’s potential future in the European Union as it is the administration of Zoran Zaev, and Brussels will certainly be watching.