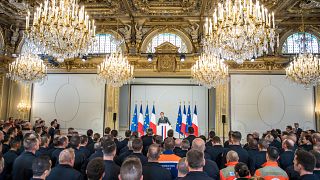 The firefighters who fought the fire were honoured at the Elysée on Thursday.

Local media reported that nearly 300 firefighters had been greeted by French President Emmanuel Macron. The Bishop of Notre Dame, Patrick Chauvet, and the Mayor of Paris, Anne Hidalgo, were also present.

French President Emmanuel Macron will host the firefighters and police officers for a special gathering to share "words of thanks".

More than 400 firefighters took part in the nine-hour battle to save the 12th-century cathedral on Monday evening.