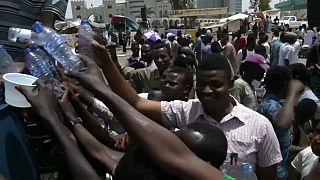 Protesters crowded around volunteers, extending plastic bottles and cups as the volunteers filled them with water.

According to volunteer Fatma, the temperature in Sudan often ranges from 40 to 45 degrees Celsius, causing many cases of dehydration.

Following weeks of demonstrations kindled by soaring food costs, high unemployment and increasing repression, 75-year-old Omar al-Bashir was overthrown on Thursday (April 11) by the military, three decades after himself seizing power in a coup.

But the Sudanese group that led protests against deposed Bashir called on Monday (April 15) for the transitional military council that has taken power to be disbanded and for a new interim civilian ruling council to be formed.

Representatives of the Sudanese Professionals' Association (SPA) piled pressure on the military commanders who have taken over, issuing a long list of demands for deeper and faster change to end repression and a dire economic crisis.