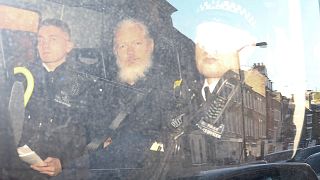 A war of words has broken out between the Ecuadorian government and Wikileaks' founder Julian Assange.

Julian Assange’s lawyers dispute these claims and say Ecuadorian government has been "making outrageous allegations over the last few days to justify what was an unlawful and extraordinary act in allowing British police to come inside an embassy". They added that Assange's fears of a US extradition threat were proved correct this week after allegations were made that he conspired to hack into a classified Pentagon computer.

The Wikileaks founder faces up to twelve months in prison after being found guilty of breaching his bail conditions. Assange is being held at Belmarsh Prison in London and is now expected to fight extradition to the US over an allegation that he conspired with former army intelligence analyst Chelsea Manning to break into a classified government computer.

He took refuge at the Ecuadorian embassy in 2012 and had been 'in hiding' there until last week when he was forced to leave by the UK police. Assange made the decision to move into the embassy in London after losing his battle against his extradition to Sweden, where he faced allegations including rape.