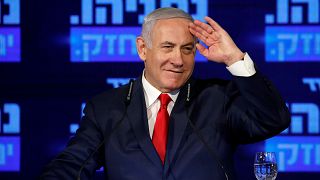 Is Netanyahu's annexation threat a panic move as election looms?

Prime Minister Benjamin Netanyahu has pledged to formally annex Jewish settlements in the occupied West Bank ahead of Tuesday's elections in Israel.

He is in the middle of a closely fought election race with his former army chief of staff Benny Gantz and is competing for votes with other right-wing parties who are in favour of annexing part of the West Bank to Israel. The settlements are considered illegal under international law - but Israel firmly disputes this.

Netanyahu announced in an interview on national television that if re-elected he would add 10 per cent of West Banks's territory, which is currently occupied by Jewish settlers. This move is believed to be designed to appeal to Israel’s conservative voters. Turkish President Recep Tayyip Erdogan in return has said that the West Bank 'belongs to the Palestinians.’

Israel says the issue of settlements are being used by the Palestinians as a pretext to avoid direct peace talks. It claims settlements are not a genuine obstacle to peace and are negotiable.

Bill Neely discusses how important this election is for the incumbent PM, both politically and personally in the player above.