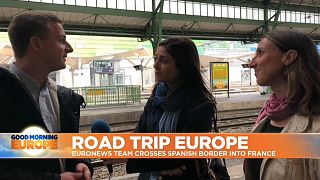 Road Trip Europe Day 13: "We will listen to people who feel abandoned"

Ahead of the European elections in eight weeks' time, we're on a road trip across the continent to speak to people about the issues they care about.

After covering nearly 2,000 km through Portugal and Spain, our team has crossed the border into France, looking for the real stories beyond the headlines. We've brought our red couch and nearly two weeks of testimony from the first two countries.

In Portugal, harbour worker Jorge Brito was one of the first people we met on the road trip. He was in the middle of a double shift when he stopped to speak, saying that it's inequality among the bloc's countries that causes problems.

“We all have the same currency but in France the minimum wage is higher than the average salary in Portugal - the minimum wage, the one nobody there wants to make," he told Anelise Borges.

"So it’s a big gap. That’s what I would like for Europe to rethink. If it is a real union, it needs to reach balance. And if we’re talking about wages, we should also talk about the transport sector, healthcare., and have a similar model for Europe. We need an European monetary fund. If it’s a union, it’s a union for everything. Otherwise, it’s not a union.”

But Brito had hopes that the EU can contend with the problems it faces to build a brighter future.

“I believe in Europe. I would never think that with globalisation Portugal would be better off on its own. But certain things must change.”

In Alicante, Portugal, people hoped for change as well. High unemployment in the area means that young people are constantly leaving, and rarely returning. The trend leaves an ageing population struggling to support a vibrant society, and of course parents and grandparents missing the children that have moved away in search of more opportunity.

“The youngest people here are my son and my daughter," a waiter said.

Democracy in Spain is still in many ways young- and so, in many ways, the Spanish see it more clearly as something precious. Truck drivers Jose Polo and Daniel Rodriguez stressed that when they vowed to vote in European elections no matter what. They always vote- and they appreciate the positives of the EU despite the problems. Freedom of movement and the euro have been crucial to them as drivers- it now saves them hours every time they cross a border and removes the need to exchange currency. But just like Jorge Brito, they complained of the inequality across the bloc.

"A German worker's salary is not comparable to that of a Spaniard," said truck driver Jose Polo. He'll be out in May voting based on those issues.

"I have always said that we fought hard for democracy," he said. "And democracy is really important."

We also stopped in Alicante to talk to a different sort of Spaniard- the British kind.

Alicante is home to large British expat community, most of whom keep one eye on their homeland- especially these days.

Carole Saunders, has been a local elected official in the area for the past 8 years.

She spoke to us a day after the British Parliament rejected every single Brexit proposal set before it in a series of indicative votes. Saunders has been watching every twist and turn of the Brexit saga from sunny Alicante.

"We actually feel abandoned by the British public that voted out," said Saunders.

"And a lot of those people that haven't voted for thirty-odd years, they were voting for one reason and one reason only that they didn't like the immigration policies. And Brexit isn't going to bring a solution to that."

In Calpe, there were other British expats who felt the same. There's a sense of tension around what will happen, especially among those who don't have a second passport.

"I think there is a lot of confusion," one man told Euronews' Anelise Borges.

"Nobody seems to know what they are doing. One party is saying one thing, one is saying the other and the people haven't got a clue what is happening."

At the border, Euronews correspondent Cristina Giner said goodbye to the road trip as Cyril Fourneris said hello- he'll be joining Anelise Borges for the French leg of the trip.

"We will travel through the southern part, the regions that are not the richest in the country- and I'm sure people will want to talk," said Cyril.

"We will listen to people who are kind of angry, feel abandoned, we'll meet Gilets Jaunes of course. We'll also meet some farmers who believe another way of doing things is possible."

Stay with us! Euronews will be driving on through the bloc to feature more of your voices. Follow Road Trip Europe from beginning to end, from now until the EU Parliamentary elections at the end of May. Watch euronews.com or Good Morning Europe for the next update.