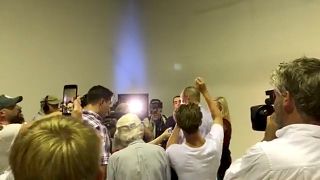 A controversial Australian senator had a raw egg cracked over his head and faces censure from fellow MPs over comments concerning the New Zealand mosque shootings.

A controversial Australian senator had a raw egg cracked over his head and faces censure from fellow MPs over comments concerning the New Zealand mosque shootings.

Senator Fraser Anning was called out for implying that Muslim immigration was to blame for the shootings.

In a Friday tweet, Anning asked: "Does anyone still dispute the link between Muslim immigration and violence?"

Television cameras caught the moment a boy broke an egg on Anning’s head during a news conference on Saturday in Melbourne. In the video, the senator is seen turning around and punching the boy several times.

Police arrested the boy but released him without charge pending a further investigation.

The government and opposition party will pass a censure motion against Anning for the comments he’s made when Parliament resumes in April.

Australian Prime Minister Scott Morrison called Anning's comments "disgusting" and said they had no place in the Australian Parliament.