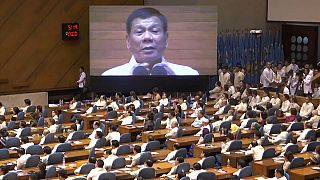 Phillipines moves to reduce age of criminal responsibilty to 12

The Philippine government is one step closer to lowering the age of criminal responsibility to 12.

The country's President Rodrigo Duterte is pushing for the change, claiming that drug barons are using children as mules - he originally favoured the age of 9.

The bill has passed through the House of Representatives and is now before the Senate, despite public protests.

But Carlos Conde, a researcher for Human Rights Watch based in Manila does not accept the president's claim that large numbers of children are being used for drug smuggling.

He said: "This is a contentious, even specious argument made by the government.

There is a better way to help children involved in criminality. The institutions they are currently being placed in are not reformative or rehabilitative. Their human rights are not respected.

The President's plan is a very serious step backwards."

Human rights activists gathered to protest outside the Senate complex in Manila.

Groups including Child Rights Network, Salinlahi, and Education Network Philippines called on legislators to halt moves to lower the age of criminal responsibility and instead ensure protection of children and their rights.