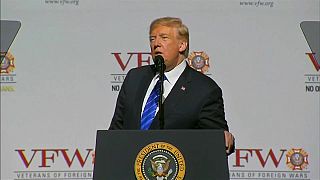 EU considers stepping up plans to circumvent US Iran sanctions

The European Union considered on Monday how it could step up plans to circumvent President Trump's Iran sanctions.

The EU Foreign Affairs Council (FAC) met in Brussels to examine options around what is known as a Special Purpose Vehicle [SPV]. This arrangement would function as a workaround to help European companies continue to do business with Tehran.

The FAC will look at what sort of representation the EU will have at the upcoming jointly organised US-Poland summit on the Middle East expected to focus on Iran.

In May, President Donald Trump withdrew the US from an international 2015 deal to control Iran's nuclear ambitions, formally known as the Joint Comprehensive Plan of Action.

Under that deal, nuclear-related Western sanctions on Iran were lifted.

Trump argued that the deal did not prevent Iran from finding ways to develop nuclear weapons. Iran has always insisted that its nuclear research is strictly for civilian purposes.