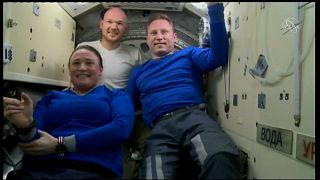 After six months in space, the Soyuz MS-09 crew of one American, one European and one Russian astronaut returned to Earth on Thursday (December 20) after their mission to the International Space Station.

The Soyuz capsule landed upright and safely at 0502 GMT, one minute ahead of schedule, in frigid temperatures.

Cosmonaut Sergey Prokopyev of the Russian space agency Roscosmos was pulled out first, followed by NASA astronaut Serena Auñón-Chancellor, the first Cuban-American in space. The third member of the crew to be pulled out was German Alexander Gerst of the European Space Agency (ESA) who pumped his fist in the air in victory.

The mission captured international attention in August when a small leak aboard the station was discovered.