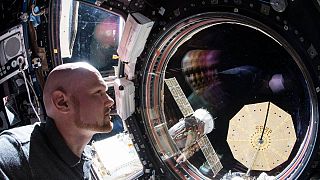 After almost 200 days in space, German astronaut Alexander Gerst is heading home. Gerst is scheduled to leave the International Space Station (ISS) along with US astronaut Serena Auñón-Chancellor and Russian cosmonaut Sergei Prokopyev. Gerst officially handed command of the ISS over to cosmonaut Oleg Kononenko on December 18.

The departure marks the end of Gerst’s second mission to the ISS – he is the second European astronaut to have commanded the ISS. The outgoing crew will leave the station on the Soyuz MS-09 spacecraft, and is expected to land in Kazakhstan in the early morning hours of December 20. He’ll then be brought to the ESA’s astronaut centre in Cologne for testing that will evaluate how the human body responds to six months in space.

Gerst was on the ISS when a leak was detected on one of the station’s Soyuz capsules in August. The leak was determined to be “minute” and did not pose any threat to the crew. He also conducted over 50 experiments over the course of the mission, and was the first astronaut in space to work with the AI companion CIMON – short for Crew Interactive MObile CompanioN.