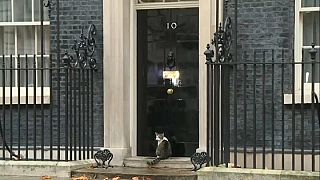 'Footgolf', fireworks and balloons: No Comment videos of the week

'Footgolf', Downing Street’s cat and an extravagant balloon festival feature in the best of Euronews' No Comment videos from this week.

Take a look in the video player, above.

First up we're in Africa where a Frenchman won the fifth edition of the Footgolf Cup in Marrakech, taking home a not-too-shabby prizewinning sum of $1,000 (€882). 'Footgolf' is a combination of football and golf.

Next, we're in London, where Larry the Downing Street cat saw a policeman come to his aid when he was left in the cold outside Number 10.

Then, to Indonesia, where researchers, officials and activists discovered 16kg of plastic waste in the stomach of a dead whale, which had been washed up in Wakatobi National Park.