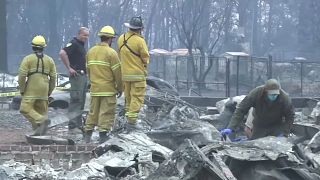 Firefighters work around the clock to dampen down Malibu fires

Thousands of acres of land and hundreds of homes have been destroyed by fires in California. Whole communities were wrecked in the most lethal wildfire storm since records began.

Firefighters beat back a new round of winds on Sunday. The fire's growth is believed to have been largely stopped.

Malibu celebrities and mobile-home dwellers in nearby mountains were slowly learning whether their homes had been spared or reduced to ash. Two people were killed and the fire has destroyed nearly 180 structures.

Further north, it was confirmed that 29 people were killed in and around the town of Paradise, matching the state's record for deaths in a single fire.