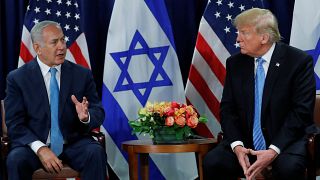 The UN General Assembly got a little show and tell from Israeli Prime Minister Benjamin Netanyahu yesterday. Israeli Prime Minister Benjamin Netanyahu made his address to the UN and used his time to point the finger directly at Iran, as he has in previous speeches in the same forum. Netanyahu held up maps and photos of what he claimed was a building that housed Iran's "secret weapons programme"

"Today, I am disclosing for the first time that Iran has another secret facility in Tehran. A secret atomic warehouse for storing massive amounts of equipment and material from Iran's secret nuclear weapons programme."

He then proceeded to repeat the claim on his Twitter account, embedding a picture of the building from the air.

It's not a far cry from what he's done before at the UNGA. In 2012, he showed up with a cartoon bomb drawing in hand and proceeded to illustrate it with a red line — to point out the moment at which the international community should act to curb Iran's nuclear programme.

Iran has refuted the claims made yesterday.

"The world will only laugh loudly at this type of false, meaningless and unncessary speech," said Iran foreign ministry spokesperson Bahram Qassemi

A US intelligence official speaking to Reuters called the claims, “somewhat misleading. First, we have known about this facility for some time, and it’s full of file cabinets and paper, not aluminum tubes for centrifuges, and second, so far as anyone knows, there is nothing in it that would allow Iran to break out of the JCPOA any faster than it otherwise could.”

Iran Deal in the Spotlight at the UNGA

Iran has been a point of contention from the first day of this session of the General Assembly. US President Trump and Iran's President Rouhani used their speeches to attack one another, with Trump asking other countries to join him in isolating the Islamic Republic's leadership.

Under Trump, the US pulled out of the Iran nuclear deal in May, leaving EU countries scrambling to make it work without them. Further US sanctions on Iran, this time on oil, come into effect on November 4.

“Iran’s leaders sow chaos, death and destruction,” he said. “They do not respect their neighbors or borders or the sovereign rights of nations."

EU representatives have spent some of their time in New York this week meeting with Iranian officials in a continued effort to salvage the nuclear deal, but it's unclear how successful any attempts will be without the political and economic clout of the US.

Today is the last day of the 73rd session of the UN General Assembly. US President Donald's Trump's speech on Monday was undoubtedly the most anticipated moment — the American President followed up his explosive speech last year with an equal focus on his "America First" agenda. It's still jarring to hear his talk of sovereignty in the spiritual house of cooperation and diplomacy, but this year there was a sense of preparation as his policies are well known.

“We will never surrender America’s sovereignty to an unelected, unaccountable, global bureaucracy,” Trump said to a silent crowd. “America is governed by Americans. We reject the ideology of globalism, and we embrace the doctrine of patriotism."

He also touted his own achievements, drawing laughter after his claim that his administration had more accomplishments than any other thus far.

President Macron of France then did his best to be Trump's foil. Macron may have been out auditioning for the leader of a multilateral free world as his speech highlighted the values of cooperation and the pitfalls of nationalism.

"Don't accept the erosion of multilateralism," Macron said. "Don’t accept our history unravelling. Our children are watching. Let us address the crisis, let us work together to combat these inequalities — on a human level, mindful of our history."

"Nationalism always leads to defeat," he continued. "If courage is lacking in the defense of fundamental principles, international order becomes fragile and this can lead as we have already seen twice, to global war. We saw that with our very own eyes."