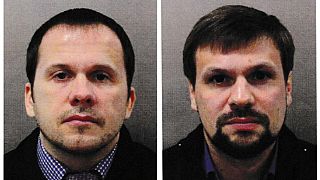 When British authorities named Alexander Petrov and Ruslan Boshirov as suspects in the novichok poisoning of the Skripals in Salisbury, their real faces were pasted on screens arounds the world — but not their real names. Authorities were clear they suspected Petrov and Boshirov to be false names.

Now, Ruslan Boshirov has been fully unmasked as a highly decorated officer in the Russian military's special forces according to investigative website Bellingcat, which named him as Colonel Anatoliy Chepiga. The investigation claims Chepiga is a member of the military intelligence services, or GRU, and received Russia's highest military honour in 2014. The hero of the Russian Federation award is presented by the President personally, meaning it's very likely Chepiga met Vladimir Putin at least once when he received his award.

British authorities have not yet commented officially, but the BBC has reported that authorities are not contesting the identification. British Defense Minister Gavin Williamson tweeted about the case late on September 26, only to delete the tweet moments later.

“The true identity of one of the Salisbury suspects has been revealed to be a Russian Colonel. I want to thank all the people who are working so tirelessly on this case,” said the tweet.

Theresa May's scheduled address to the UN General Assembly came just after the revelations were made public. She didn't address them specifically, but used the time to call out Russia on the world stage — and while the Russian delegation looked on.

"We have seen what happens when the natural patriotism which is a cornerstone of a healthy society is warped into aggressive nationalism, exploiting fear and uncertainty to promote identity politics at home and belligerent confrontation abroad while breaking rules and undermining institutions," said May in her speech. "And we see this when states like Russia flagrantly breach international norms, from the seizing of sovereign territory to the reckless use of chemical weapons on the streets of Britain by agents of the Russian GRU."

Another poisoning case is also unfolding in the shadow of the Salisbury investigation — Pyotr Verzilov, a member of Russian protest group Pussy Riot was released from a German hospital on Wednesday. Verzilov has been in hospital for weeks, and was airlifted from Moscow to Berlin for treatment. German doctors say his condition is consistent with poisoning, but were unable to find traces of the poison in his system.

Verzilov told German paper Bild on the day he left hospital that he is convinced that Russian special services are responsible for the poisoning. Other members of Pussy Riot have come forward with multiple theories to explain why the Russian state may have wanted to harm Verzilov. One is his participation in a Pussy Riot protest during the last match of the World Cup where he rushed the pitch. Another is his involvement in an investigation into three Russian journalists killed in the Central African Republic this summer. He was initially supposed to join the journalists as they investigated the presence of a private Russian military group in the area, but stayed behind to participate in the World Cup protest.

Pussy Riot member and Verzilov's ex-wife Nadezhda Tolokonnikova said he had received some information about the death of the journalists the day before he was poisoned.

Russian authorities have denied having any hand in the incident, and Verzilov says he is planning on returning to Moscow once he has recovered.