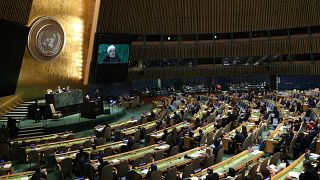 Both US President Donald Trump and his Iranian counterpart Hassan Rouhani have given fiery speeches at the UN General Assembly, but Trump in particular got off to a rocky start.

"Madam President, one year ago I stood before you for the first time in this grand hall I addressed the threats facing our world and I presented a vision to achieve a brighter future for all of humanity," he opened. "Today, I stand before the United Nations General Assembly to share the extraordinary progress we've made. In less than two years. My administration has accomplished more than almost any administration in the history of our country," he continued as laughter rose from the audience. "I didn't expect that reaction, but that's okay."

It was an unusual reaction in a forum known for a stiff diplomatic atmosphere, but there wasn't much laughter as Trump continued his speech. He spoke about patriotism and his own achievements, but also about Iran, asking all other countries to join the US in isolating Iran's leadership. The US pulled out of the Iran nuclear deal in May, leaving the other countries who were signatories to the deal scrambling to make it work anyways.

Iranian President Hassan Rouhani wasn't about to take the criticism lying down and hit back in his own address four hours later.

"It is ironic that the US government does not even conceal its plan for overthrowing the same government it invites to talks," Rouhani said. "For dialogue to take place, there is no need for a photo opportunity. The two sides can listen to each other right here in this Assembly. I am starting the dialogue right here, and state, in unequivocal terms, that the question of international security is not a toy in American domestic politics."

He went on to call American sanctions "economic terrorism" And it wasn't just the leaders — speaking on the sidelines of the UN General Assembly, US national security advisor John Bolton warned Iran not to cross Washington or its allies.

"According to the mullahs in Teheran, we are the great Satan, Lord of the Underword, Master of the Raging Inferno," said Bolton. "So, I might imagine that they would take me seriously when I assure them, today, that if you cross us, our allies, or our partners, if you harm our citizens, if you continue to lie, cheat and deceive, yes, there will be hell to pay."

"The murderous regime and its supporters will face significant consequences if they do not change their behavior. Let my message today be very clear: We are watching, and we will come after you."

Bolton, a known hardliner, is not always on the same message track as his boss. He was vocally critical of the North Korean regime and saw himself take a backseat at the Singapore summit where Trump and Kim met and Trump heaped praise on the North Korean leader.

Of course, Iran wasn't all Trump spoke about when he held court from the podium of the UN General Assembly — in the spiritual house of multilateralism, Trump attacked that very concept.

"We will never surrender America's sovereignty to an unelected, unaccountable global bureaucracy, he said. "America is governed by Americans. We reject the ideology of globalism and we embrace the doctrine of patriotism."

He also praised North Korean dictator Kim Jong-un and hailed their improved relationship, as well as complained again that the rest of the world treats his country unfairly.

"The United States is the world's largest giver in the world by far of foreign aid," he said. "But few give anything to us."