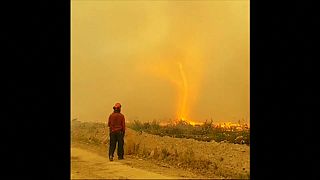 An inferno in Canada even incinerated a fire hose deployed to fight it.

Video posted on Instagram on August 19 showed three firefighters trying to pull back the hose, which was sucked into a fire whirl.

According to local media, the fire tornado was caused by a mix of the heat rising off the wildfire and high winds.

British Columbia declared a state of emergency in August due to the wildfires.