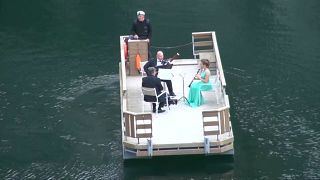 The Karelian State Philharmonic Orchestra performed on water at an abandoned marble quarry.

As the sun set, onlookers perched on top of cliffs listened to the sound of the musicians, who played on a boat which circled the quarry.

Speaking after the event, Soloist at the Karelian state philharmonic orchestra, Valery Dzubuk, said it was "good to play" aboard the boat.

"It is absolutely not scary. It is quite comfortable. Yes, it was windy and of course, it was a minus because one needs to fix music texts and needs to be more concentrated and more attentive. But it was good to play, and the rolling and turns didn't interfere," Dzubuk said.

The orchestra performers launched the two-day open-air symphony music festival on August 24 in the marble quarry at Ruskeala, in Russia's Republic of Karelia.

Firefighters in the Brazilian state of Parana are working tirelessly to find about 30 people thought to have been engulfed in a landslide that hit a coastal highway.

Pomegranates are the stars in Tehran for the fruits' festival