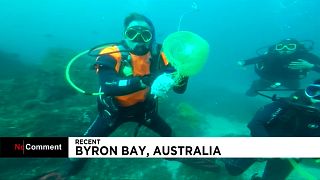 A diving lesson in Byron Bay, Australia, took an unexpected turn when the instructor noticed a shark in pain.

When teaching the lesson, instructor Inaki Aizpun noticed the shark had plastic netting caught in its jaws.

The Spanish native saved the grey nurse shark from death by tugging the plastic from its jaws.

Plastic waste often ends up in the ocean, wreaking havoc on marine ecosystems.

The European Union has pledged to reduce marine waste by 30% by 2050.

This followed after it emerged that there will be more plastic in the ocean than fish by 2050 if preventative action is not taken.