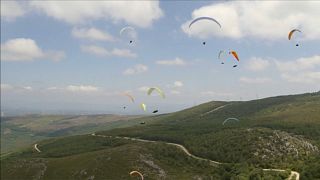 150 of the continent's best paragliders graced the skies above Montalegre, Portugal, in July as new champions were crowned in the European Paragliding Championship.

The 15th instalment of the championship ran from July 16th-28th and saw men and women compete together, taking on eight separate tasks over a total distance of 567km.

France's Seiko Fukuoka Naville was the highest ranked woman, with her compatriot Meryl Delferriere in second and Switzerland's Yael Margelisch in third.