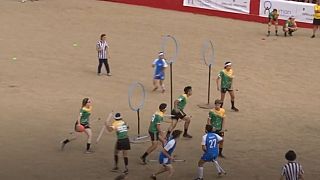 Twenty-nine national teams are participating. The tournament will run through July 2.

The bi-annual competition honours the fictitious sport from J.K. Rowling’s Harry Potter series, where witches and wizards compete in the air on broomsticks. The objective is to obtain the most points, either via scoring goals by passing balls through rings, or by catching the “snitch,” a special ball. In the IQA World Cup, the snitch is attached to a snitch runner’s waistband.

Tom Ffiske, a spokesman for the International Quidditch Association, told ABC News that quidditch “is the world's most inclusive sport".

The IQA was founded in 2009 and consists of 18 national governing associations. The first World Cup was held in 2012, coinciding with the 2012 Summer Olympics, and took place in Oxford, UK. The US took home the trophy that year.

OTHER SPORTS HARRY POTTER
Now playing Next
no comment