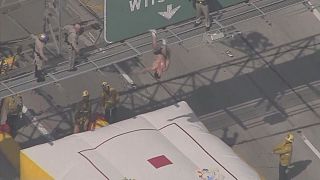 Man back-flips to safety from a highway sign, gets arrested

A man in California standing up on a freeway sign this morning back-flipped his way to safety —and then he was arrested.

The I-10 freeway was closed in downtown Los Angeles during rush hour Wednesday morning due to a shirtless man on a freeway sign apparently protesting pollution.

the man was reported around 8:30 am and appeared to be holding a bullhorn with anti-pollution banners hanging from the freeway sign.