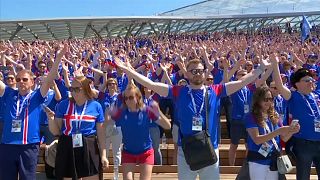 Iceland fans made the most of their reputation as fiery Vikings on Saturday, practising their thunderous "Viking clap" ahead of their World Cup match in Moscow.

The smallest nation in the tournament, with 332,000 people, Iceland will be taking on Latin American giants, Argentina - themselves renowned for their rowdy fans.

But their Viking mentality means Iceland will fear no-one, and hundreds of fans dressed in blue filled the stands of the Zarayadye Park in Moscow, clapping their hands over their heads in a crescendo ending in a frenzy of chanting.

Iceland's fans won the hearts of soccer supporters in the European Championships in France in 2016, when they rocked the stadiums with the epic 'huh' war cry supporting their team into an historic performance in the round of sixteen.

In addition to Argentina they will play Nigeria and Croatia in Moscow.