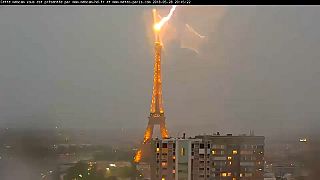 The Eiffel Tower was struck by lightning on May 28 amid storms and heavy downpours in the French capital.

Many parts of northern and western France were put on orange storm alert, as heavy rain and thunderstorms swept across the country.

A webcam hosted by Paris-based weather site meteo-paris.com captured the moment the Eiffel Tower was struck.

Heavy rain in Paris on May 29 caused havoc for transport in the city as a number of metro stations were closed due to flooding.

According to Le Parisien, nearly 30 centimetres of rain fell in the 19th arrondissement.

Trains were unable to stop at the Jourdain stop, on metro line 11, due to flooding in the station.