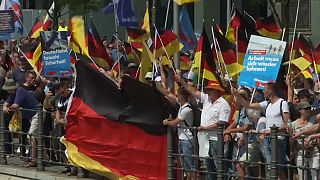 Supporters of the nationalist Alternative for Germany party marched through central Berlin to protest against Chancellor Angela Merkel's government on Sunday, while a heavy police presence kept the marchers away from a raft of counter-demonstrations.

Police said several thousand people turned out for the demonstration organized by Alternative for Germany, known by its German acronym AfD.

The AfD event opened with German flags, placards such as "No Islam in Germany" and chants of "Merkel must go" at Berlin's central train station.