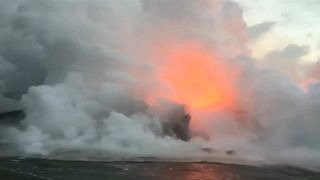 Hawaii's Civil Defense agency warned motorists, boaters and beachgoers to beware of toxic clouds of so-called "laze" -- a combination of "lava" and "haze" -- which formed as two streams of hot lava poured into sea water.

The caustic plume, which can be fatal if inhaled, was the latest danger in an eruption that shows no signs of stopping. The cloud could extend as far as 24 km, mostly along the coast and offshore, geologists said on Sunday. Even a wisp can cause eye and respiratory irritation, and it causes acid rain that has corrosive properties equivalent to diluted battery acid, the U.S. Geological Survey said.

Two thousand people have been ordered from their homes due to lava flows and toxic sulfur dioxide gas, levels of which have tripled in the last two days, according to the County of Hawaii Civil Defense. Hawaii National Guard has warned of more mandatory evacuations if further highways are blocked.