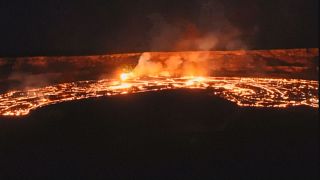 The United States Geological Survey (USGS) released a timelapse video of lava flowing from Hawaii's Kilauea Volcano, filmed from day to night on April 25 to April 26.

Hundreds of people were under an evacuation order on Friday (May 4) after the Kilauea Volcano on Hawaii's Big Island came to life, belching ash into the sky and spewing fountains of lava in a residential area, officials said.

The volcano, one of five on the island, erupted on Thursday (May 3) after a series of earthquakes over the last couple of days, including a 5.0 tremor earlier in the day, the US Geological Survey reported on its website.

Residents in the Puna communities of Leilani Estates and Lanipuna Gardens subdivisions, home to about 1,700 people, were ordered to evacuate after public works officials reported steam and lava spewing from a crack, according to the county's Civil Defense Agency.