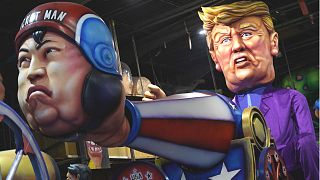 Crowds dressed in bright colours danced down the streets in Mexico, while in Haiti one reveler draped himself in snakes.

Carnival capital Rio saw one of the biggest parties, with huge floats and scantily-clad dancers entertaining attendees late into the night.

Float designers took aim at world leaders in their satirical depictions of politicians popping up at carnivals in some of Europe's major cities. Nice, Lisbon and cities across Germany all got in on the fun.

Caricatures of US President Donald Trump and North Korean Leader Kim Jong-un were most popular while Chancellor of Germany Angela Merkel and British PM Theresa May also made an appearance.