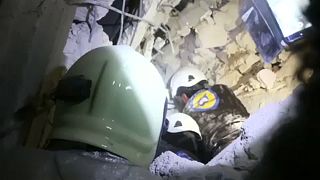 The Syrian civil defence group known as the White Helmets has released video online showing the rescue of a child after Russian air raids across the northern Syrian province of Idlib.

The video shows civil defense workers digging a baby out of the rubble of a collapsed building in what is said to be the provincial capital, Idlib city. A man then carries the crying child to a waiting ambulance.

Russian jets intensified their raids on Idlib province on Sunday (February 4), a day after rebels shot down a Russian warplane and killed its pilot.

Civil defence sources said air raids struck the towns of Kafr Nubl and Maasran, as well as the cities of Saraqeb, Maarat al Numan and Idlib. Several deaths and dozens of injuries were reported as rescuers dug through the rubble.

In Idlib city, the provincial capital, one witness said a five-storey building was leveled and that at least fifteen people were feared dead.