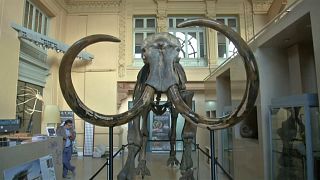 A mammoth goes under the hammer in Lyon

A mammoth goes under the hammer in Lyon

They are calling it a 'mammoth sale'.

They are calling it a 'mammoth sale'.

An auction with a difference has taken place in the French city of Lyon, with the sale of the world's largest privately-owned skeleton of a woolly mammoth.

A construction company that has the mammoth as its logo has snapped up the skeleton for a cool 430,000 euros.

The remains were found in Siberia and are thought to be around 15,000 years old.