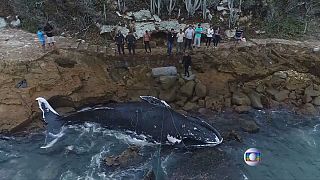 Updated: 25/10/2017
<p>The body of a seven tonne humpback whale has been found on a Rio de Janeiro beach. </p> <p>Brazilian environmental authorities confirmed it was the same whale that had been rescued just days earlier over the weekend.</p> <p>On Sunday (October 22), the four metre long (13 feet) whale beached itself on the Playa Grande beach. </p> <p>Dozens of beachgoers and experts gathered to save it. They successfully managed to tow the mammal out to open water.</p> <p>However, the body of the same whale was found on a rocky outcropping in the same area just two days later in a state of advanced decomposition.</p>
no comment