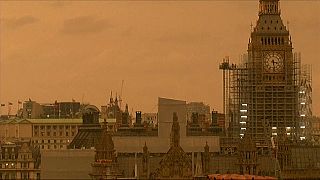 More than 5,100 dead as Turkey declares a state of emergency

Although Ophelia has been downgraded to a post-tropical cyclone, Ireland’s National Emergency Coordination Group on Severe Weather warned that the storm is still “unprecedented, with serious life-threatening conditions.”

Ireland’s weather service, Met Eireann, described the storm as the most powerful on record to have ever been this far east in the Atlantic. Forecasters warned of flying debris, such as tiles blown from roofs.

Wind warnings were in place for Northern Ireland, parts of Wales and western parts of England.

Planes were grounded at several locations in the British Isles.