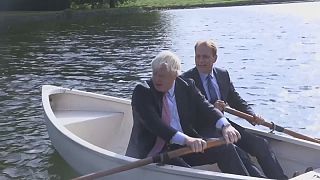 Boris on a boat

A day before crucial talks between British Prime Minister Theresa May and senior EU officials on Brexit negotiations, Foreign Secretary Boris Johnson hosted EU counterparts at his official residence in Kent, taking one out in a rowing boat.

During a walk around the Chevening House estate with a group of Eastern European foreign ministers and his wife, Johnson persuaded one guest to head out onto the lake in a small boat.

Despite protestations from his wife, Marina Wheeler, who joked that they were “not drowning the foreign ministers,” the Czech Republic’s Deputy Foreign Minister Ivo Sramek, jumped into the rowing boat and took it out before coming back to pick up Johnson.

“This is going to be a tremendous success,” Johnson said as he rowed off for a short paddle on the water with his guest.