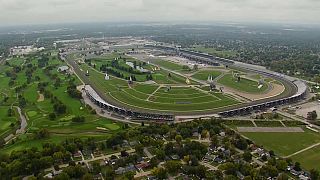 Updated: 15/10/2017
<p>Matt Hall of Australia continued a late-season charge by earning his second consecutive pole position with the top time in qualifying for the Red Bull Air Race season finale at Indianapolis Motor Speedway.</p> <p>He scored the top time of one minute 4.149 seconds.</p> <p>Peter Kopfstein of the Czech Republic and Juan Velarde of Spain claimed second and third.</p> <p>In a shock match up – Sonka and Muroya will scrap it out against each other in Sunday’s opening head-to-heads.</p> <p>Sonka currently leads the standings with 63 points, with Muroya in second on 59 points. </p> <p>A maximum of 15 points are up for grabs for the winner on Sunday.</p>
no comment