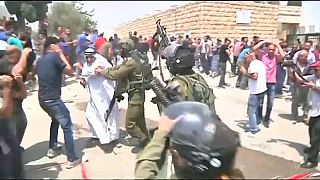 Updated: 20/07/2017
<p>A Palestinian who tried to stab two Israeli soldiers in the West Bank on Thursday was shot dead, according to the Israeli army. </p> <p>The attack happened as Israel was facing mounting Palestinian anger over newly-installed metal detectors at the entrances to the Temple Mount-Noble Sanctuary compound – it was not immediately clear if the alleged attack was prompted by tensions over the holy site.</p> <p>Israeli Prime Minister Benjamin Netanyahu was reportedly considering whether to remove the metal detectors at the holy site. </p> <p>The security measure was installed after Israeli arabs launched a deadly attack against Israeli policemen outside the Al-Aqsa mosque last week.</p>
no comment