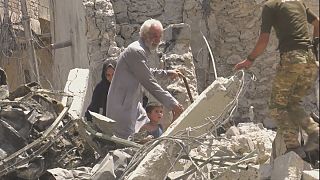 Updated: 04/07/2017
<p>Thousands of people have fled Mosul’s densely-populated Old City over the past 24 hours, Iraq state TV says. </p> <p>But thousands more are believed to be trapped in the area with little food, water or medicine, and are effectively being used as human shields, according to residents who have managed to escape.</p> <p>Months of grinding urban warfare have displaced 900,000 people, about half the city’s pre-war population, according to aid organisations. Thousands have been killed. </p> <p><span class="caps">ISIL</span>’s leader Abu Bakr al-Baghdadi made his first and only video appearance from Mosul in July 2014, proclaiming himself “caliph“ -of the so-called Islamic state. </p> <p>Baghdadi has left the fighting in Mosul to local commanders and is thought to be hiding near the Iraq-Syrian border, according to U.S. and Iraqi military sources.</p> <p>The group has moved its remaining command and control structures to Mayadin, in eastern Syria, U.S. intelligence sources have said. </p>
no comment