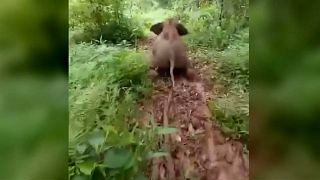 Updated: 02/07/2017
<p>It is well known that elephants love to wallow in mud, but one calf took it to a whole new level when it was filmed sliding down a steep hill in southern China. </p> <p>The two-year-old can be seen happily heading through the jungle before deciding to get on its knees to go down the slope. </p> <p>The footage was taken in China’s Yunnan Province, near the border with Myanmar.</p>
no comment