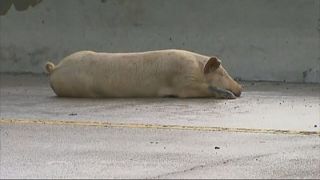 Updated: 30/06/2017
<p>Just weeks after a similar incident on a highway in Osaka, Japan, a large truck carrying live pigs overturned after crashing and catching fire just southeast of Dallas, Texas, leaving the animals wandering along the highway.</p> <p>The crash occurred on Thursday morning on Interstate-45.</p> <p>The 18-wheeler flipped over then caught fire, freeing a number of pigs but killing several others.</p> <p>The driver was not injured. The crash shut down both sides of the highway for several hours.</p>
no comment